Bass players too have a right to have their own acoustic instrument. 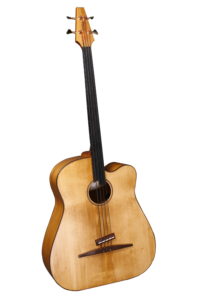 What has long been taken for granted with electric basses is still far from reality in the acoustic bass sector - an instrument that specialises in the acoustic low-frequency transmission of sound and is tailored to the needs of bassists in terms of handling and usability. Usually we are sold a guitar as a bass. The largest guitar model is often strung up with four or five strings and the new acoustic bass is finished.

But stop! In a small dreamy village, deeply hidden in the Rheingau-Taunus, resistance is forming. In the jewel called Esch, characterised by extensive meadows and gently rising fields and forests, where settlers already knew how to use the fertile loess soil for their livelihood in the 6th century A.D., Christian Stoll sets out to finally give the honourable bassists' guild their own acoustic instrument for the art of bass playing and the perfection of minstrels' playing. An acoustic instrument designed especially for bass. Shouldn't that actually be a matter of course? 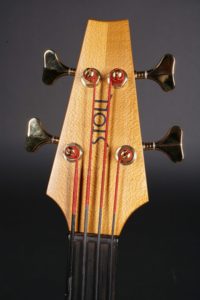 Christian Stoll has been building his Acoustic Bass since 1987 - and has continuously developed it since then. The body is considerably larger than that of a guitar and thus differs considerably from other instruments of this genre.

In the beginning the first basses had back and sides made of rosewood with a spruce top. After some experiments with maple, since 1990 the combination maple/spruce is preferred. In the course of the evolutionary process, details on the bass were optimised until it came to its present form.

The top of the Stoll Akustikbass 3.0 is made of spruce, the back and sides are made of maple. Spanish cedar is used for the wonderful neck and ebony for the fretboard. The scale is a standard "long scale" scale of 86,4 cm. 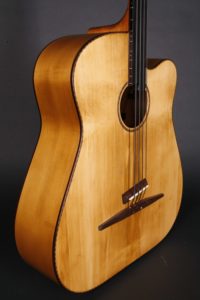 The Instrument has considerable dimensions: 128 cm in length and 54 cm at the widest part of the body. With these dimensions the weight of almost 3 kg can be described as "light". The high-quality gold-plated machine heads are made by the hardware manufacturer Schaller, and Christian Stoll has selected a McLoud as the pickup.... (webmistress's remark: details about the McLoud pickup omitted due to the fact that it is no longer utilised).

The processing is to be praised: With love of detail, every single feature is taken into account with the greatest care! Everything, from the high-quality binding on the edges of the body and the workmanship of the bridge to the extended fingerboard for the D and G strings, bears witness to the master's high level of craftsmanship and the proximity of the builder to the musician and his needs.

Of course, the size of the resonating body is initially unfamiliar to the player, and one must first stretch to bring the right hand into playing position - after all, the body is about 14 cm thick, and even though it is not that wide, it is not so easy to fit under the armpit. But after ten minutes of exuberant playing I was able to get in touch with the instrument without continuing to notice the unusual position.

The neck and the neck transition to body and cutaway are very finely crafted and invite to feel comfortable. Any playing technique is possible and technically easy to realise. Only the Constant String Spacing is a bit unusual to me. After another two minutes of making music I realised that the string spacing itself is much too tight for me. I rather prefer the wide 20 mm measure (which could certainly be realised on request) for my frying pan hands. 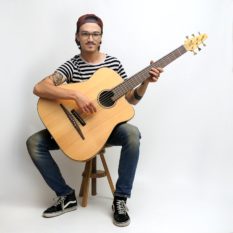 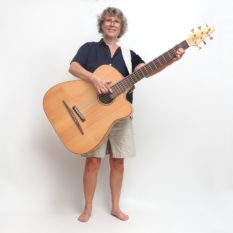 Just to make it clear: Of course this bass does not have the volume of a double bass, the laws of physics prevent it. However, this instrument leaves guitars that are converted into basses far behind in terms of sound and appearance. In my opinion, Stoll Guitars has also created a new group of instruments which can be used both as a bass and as a solo instrument, i.e. in a variety of ways.

Amplified: The cable is plugged into the lower strap pin, then the amplifier is levelled and everything is fine. The sun is rising! What you hear now is a bassy, full sounding, transparent sound that can take over any bass function. The bass actually sounds more natural than I know from all the piezo pickups I know. Hardly any high-frequency emphasis in the frequency band, simple and balanced. The promised feedback resistance is also true; one can easily keep up in the band context - but here too, the laws of physics apply. The instrument reacts sensitively to touch nuances and thus enables very dynamic playing. I don't miss a tone control, and my amp remains neutral. A perfect instrument.

Be sure to check it out! Because with this Acoustic Bass you go the whole hog.

... thank you so much for the excellent work on the custom job. Since I picked up the guitar last week, I have been able to work intensively on it. The playability is excellent ... Intonation is also decent, a special piece ... I very much hope that more musicians will be enthusiastic about this instrument.
All Testimonials